Daedo PSS, selected for the Olympics 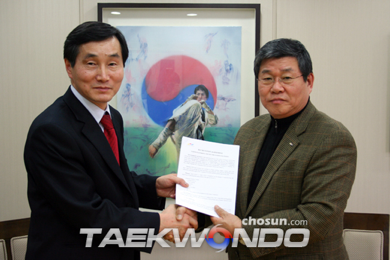 The Daedo PSS has been selected to be used in the 2012 London Olympic Games.

The World Taekwondo Federation (WTF, President Choue Chungwon) made an announcement on May 18th to all federations of member countries about the use of the Daedo PSS in next year’s Olympic Games.

This announcement was contrary to the general expectations since, among the current two recognized systems, LaJust and Daedo, the first one was assumed to have more chances to make it to the Olympic Games.

recommendation, for example in the Guangzhou Asian Games in May last year and in the 2011 World Taekwondo Championships in Gyeongju among others.

In spite of that, Daedo has been the brand selected for the Olympic Games. Apparently, the opinion delivered by Swiss Timing, the company in charge of the Scoring System in the Olympics, has had a decisive influence.

The reason for this unexpected turn is that the most important aspect for the use of the PSS in the Olympics is the compatibility with Swiss Timing, something they have persistently discussed with LaJust and Daedo. They had been maintaining that their choice would depend on the technical superiority of the electronic protector.  Finally, Swiss Timing has chosen Daedo, and the WTF has accepted their opinion.

Thus, the Daedo PSS will begin to be used officially from June 30, in the World Qualification Tournament for the Olympic Games, in Baku, Azerbaijan.